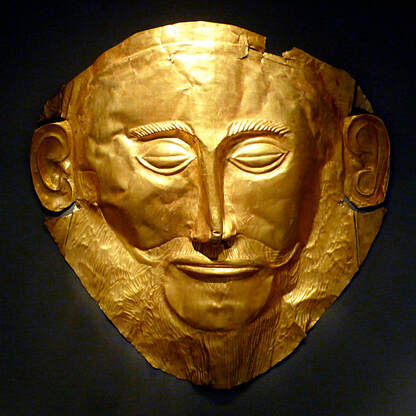 The Oresteia trilogy is made up of three plays that are connected. After a long war, Agamemnon, the famous Greek King of that name, returns home after winning the war over the Trojans. His wife Clytemnestra has been plotting his death with her lover Aegisthus, unknowing to him. Clytemnestra believes she is justified in her actions because she is avenging the death of her daughter Iphigenia, whom Agamemnon sacrificed so that he might go quickly to Troy.


The "Mask of Agamemnon" is one of the most famous gold artifacts from the Greek Bronze Age. Found at Mycenae in 1876 by the distinguished archaeologist Heinrich Schliemann. (Image to the left)
​
Oresteia's second play is The Libation Bearers. At the start of the play, Orestes, the son of Agamemnon and Clytemnestra, returns to his hometown to revenge his father's murder after being sent away as a child by his mother. He reunites with his sister Electra, and the two of them petition their father for assistance in assassinating Clytemnestra and her boyfriend, who now rule the realm. Clytemnestra and her lover Aegisthus are killed by Orestes. Orestes is pursued by the enraged Furies, who have been summoned by his mother's curse.
The Eumenides, The Oresteia's third play, translates to "The Kind Goddesses." The play begins in Delphi, at Apollo's shrine, where Orestes has traveled to avoid the Furies' wrath. Apollo insists that the Furies leave Orestes alone, claiming that it was he who told Orestes to kill Clytemnestra and that the Furies should leave him alone. They refused, so Apollo agreed to a trial in Athens, where the Goddess Athena convenes a jury of Athenians. Orestes and the furies both give their own speeches and sides of the story. When the jury votes, there is a tie, and Athena breaks the tie by voting in favor of Orestes, acquitting him of all accusations. 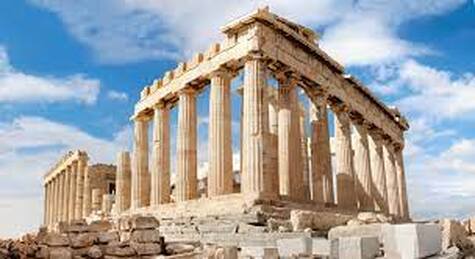 ​The following picture to the right shows the Acropolis of Athen where the trail between the furies and Orestes was held.
The Aeschylus trilogy emphasizes two themes: one is justice by revenge, and the other is that Agamemnon was destined by Zeus to die due to the curse of the house of Atreus (his father). Clytemnestra meticulously prepared and planned Agamemnon's murder with her lover Aegisthus, and had a reason to wish Agamemnon dead, while he was absent (for ten years). "Our child is gone, not standing by our side, the bond of our dearest pledges, mine and yours; by all rights, our child should be here," (The Oresteia page 136) Clytemnestra is referring to Agamemnon's sacrifice of their daughter, Iphigenia.
The Libation Bearers also brings about the theme of revenge when Orestes comes back home several years after his father's death. He meets his sister Electra who has been praying to the gods for someone to avenge her father. “Raise up your avengers, into the light, my father- kill the killers in return with justice” (The Oresteia Page 183). Orestes (guided by Apollo) plots to kill Clytemnestra. “Oh, shell pay, shell pay, by the gods and these bare hands- just let me take her life and die” (The Oresteia Page 196). Even faced with his mother Orestes is ready to kill. Orestes carries out his seething rage just like his mother before him and again justice seems to serve. In life, you thought he dwarfed my father- Die! - go down with him forever! (The Orestes Page). ​ 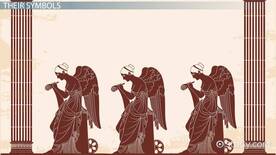 ​The furries were seen as hags with snakes in their hair, these goddesses brought justice to anyone who deserved it  ( Image to left )

A final example of justice as revenge is in the final play of The Oresteia. In The Eumenides, Clytemnestra and Aegisthus are dead. Orestes is being chased by the Furies and says, “No dreams, these torments, not to me, they're clear, real- the hounds of mothers hate” (The Oresteia Page 225), whom Clytemnestra’s ghost has sent after him.  In the final play, The Eumenides, Aeschylus had shown more civilized people of Athens in the final play, by having Athena set a trial by jury. This leads the Greeks to a more democratic and civilized society. This also leads to the way for civilizations to come.